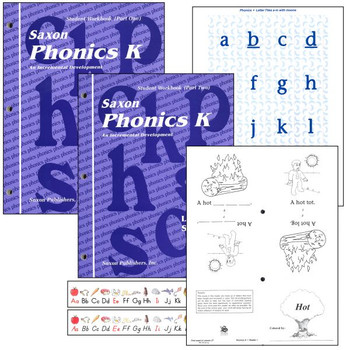 The Saxon Phonics curriculum provides integrated reading, spelling, and writing instruction for each grade K through 2. Student Material Packs contain a laminated alphabet strip (block letters on one side, D'Nealian on the other), worksheets, letter tiles (K-1), spelling word lists, spelling sound sheets, readers, activity sheets (2), and irregular spelling booklet (1-2). The Packs are consumable, so you will need a pack for each child using the program.

At each level, phonics, spelling, and writing instruction are very complete. You will need to supply additional level-appropriate literature for children to read (as with any phonics program.) Saxon grade level sets of readers are available for sale but are sold separately in easy, average and challenge difficulty levels. Decodable readers are also available in full color sets and sold separately.

Phonics K begins with auditory discernment skills and other reading readiness assessments. Provided the student is ready, instruction proceeds with lessons teaching each letter name, sound, and written form. One week is spent per letter, with constant review assuring retention. After just three letters are taught, the student begins to blend to create words and "unblend" to spell words (this is ideal reinforcement for phonetic instruction). After all letters are taught, instruction includes open (long) vowels, consonant digraphs, short and long "oo," "magic e," r-controlled vowels (ar, or, er), and the vc'/vc syllabication rule. Each lesson requires 30 minutes for instruction plus additional time for handwriting, worksheet, practice, assessment, and reading activities.

Saxon Phonics applies the same incremental, spiraling principals that are used in their math program. New content is taught in small increments, then continually applied and reviewed to achieve mastery and retention.

The methodology is somewhat similar to Writing Road to Reading’s (WRTR) in that it is rule oriented: many, detailed rules are taught throughout the program. (Both programs are based on Orton Gillingham methodology.) Also, both programs use their own coding systems to mark all word elements according to the rules, although Saxon's is a little closer in appearance to standard dictionary markings than WRTR's. Both programs teach phonics, spelling, and handwriting simultaneously. However, Saxon Phonics does allow for more leeway in offering children oral or hands-on options if they are not yet able to do the writing. Such options, along with the inclusion of letter tiles and a number of games make the Saxon program very suitable for hands-on learners.

Saxon Phonics K begins with recognition of letters and letter/sound correspondence. However, the program is far more extensive than simply introducing letters and sounds. In addition to the basics, children also learn digraphs and combinations (e.g., ch, ck, ar, er), a portion of the coding system used throughout the program, one spelling rule, and simple syllabication.

Even while students are learning phonograms, they are also learning to blend the sounds into words, applying the necessary phonics rules. Some words will probably be learned even before children master blending as they learn to identify words that contain specific sounds (e.g. identifying the word cat because it contains the /a/ sound). After lesson 25, they should be able to read words like log, hog, and hot.

The Homeschool Kit consists of 500+ page teacher's manual, two student workbooks, a colorful alphabet strip, three sets of "Kid Cards" for games, letter cards, key word cards, spelling cards, letter tiles, 15 self-constructed readers, reading word list booklet, rule book, audio pronunciation tape, and introductory video. (The same video and audio tape come with each of the three levels of Saxon Phonics.) All of the components work together to provide multi- sensory learning experiences. In my judgment, it might not be necessary to use all of them with children who learn quickly and easily. Workbooks are set up for students to complete one page a day for four days of the week with a parent's help. A weekly oral assessment is to be completed on the fifth day; forms for each are found in the workbooks.

The alphabet strip features block manuscript on one side and D'Nealian (slanted) letters on the other. You can choose whichever style you prefer to teach your child. Since worksheets are all printed in Times Roman typestyle (so that students learn to recognize letters found in books), students do not use letters on workbook pages as models for their own handwriting, but instead use the alphabet strip. In their daily lessons, children practice spelling sounds as well as forming the letters to write the sounds.

Although "spelling tests" are given, they involve a child recognizing individual sounds of letters rather than being able to spell entire words from memory.

Kid Cards and the other card decks are used to work on skills such as lower/upper case letter recognition, letter/sound identification, rhyming, spelling, and blending. The card decks are all on perforated sheets to be separated and formed into the different decks.

The program needs to be taught. The teacher's manual lists all items needed for each lesson. Then each lesson is laid out in step-by-step detail, telling the teacher/parent what to do and what to say. The audio pronunciation tape will help parents who are unfamiliar with phonetic sounds themselves. The basic lesson should take about 30 minutes to complete each day, with games, reading and other activities taking additional time. Of course, the time can be split up if a student's attention span requires it.

This program is extremely thorough and well thought out in its presentation of phonics. Because it was originally constructed for classrooms, the Saxon Phonics series is designed as a three year-program. It allows for the likelihood that many children will not complete the entire kindergarten program because of time constraints, and it also recognizes the fact that some children will encounter the first grade program without first having gone through level K. Consequently, there is more here than we should feel obligated to accomplish. The first grade program will again cover the basics, although at a much quicker pace. Those parents who have already been introducing their young children to letters and sounds might find that it works to skip the Level K and begin with Saxon Phonics 1.

Level 1 reteaches the basic letters and sounds already taught in Level K but at a much quicker pace. It goes on to cover more complex phonograms such as tch, dge,and eigh; prefixes and suffixes; compound words; and more complex syllabication. Homestudy Kit materials are similar to those in Phonics K, with the addition of an irregular spelling booklet and three more sets of "Kids Cards." Students also have 52 self-constructed readers this year. The teacher's manual is almost 800 pages in length, and the heftier student workbooks include two worksheets per lesson. Students complete one of these worksheets with a parent/teacher and the second can be used for independent work, to extend a specific concept, or for extending the lesson for a child who needs additional work. The number of rules taught this year expands along with the various program components in keeping with the expanded concepts to be covered. Weekly spelling tests at this level include sight words for memorization along with the phonetic words using spelling rules taught this year.

Throughout Phonics 1, the level of difficulty increases significantly. Lessons should take about 45 minutes per day with games and other activities requiring additional time.

Level 2 briefly reviews vowels and consonants, then continues reviewing combinations, digraphs, sight words, and rules already taught in Phonics 1. If a child (second grade or older) is not solid with all the vowel and consonant sounds, he/she should begin with Phonics 1. Phonics 2 expands into more advanced prefixes and suffixes (e.g., mono, bi, tri, quad); additional final, stable syllables (e.g., sion, tion, tious); and more-challenging elements of phonics, spelling, and syllable division. Much of the program is a reinforcement of concepts already learned, but with the integration of more complex vocabulary—lengthier, and more-complex words. For example, lesson 88 teaches words such as launch, auction, and canine. There are two worksheets to be completed each day. The first requires parent/teacher direction, while the second can be used for independent work or to extend a specific concept. Lesson time should require about 30 minutes per day with additional time required for games and other activities.

The Homestudy Kit is similar to that for Phonics 1, but it does not include letter tiles since children should no longer need these.

Saxon created a revised version of this course for classroom use. Homeschoolers should continue to use the first edition reviewed here. However, the revised version now has sets of readers that can be used with any version, homeschool or classroom of Saxon Phonics and are sold separately. Fluency readers are sold separately and come in full color sets in three levels: easy, average, and challenge. Decodable readers are in the kit in black and white color book version but a full color set is also available and sold separately.